Most property developers would say the current market is tough but as the saying goes, when the going gets tough, the tough get going. In the early 2000s, it was no easy feat for YTL Land & Development Bhd to revive the historically rich by long-neglected Sentul in Kuala Lumpur and change the public’s perception of the previously notorious quarter.

Thanks to the developer’s efforts, the area’s skyline has changed – it now has iconic skyscrapers the like of The Capers and The Fennel. Meanwhile, The Kuala Lumpur Performing Arts Centre (klpac) and Sentul Depot attract a host of visitors to this former railway hub, located 5km north of the heart of Kuala Lumpur.

So far, YTL Land has completed four condominiums with 2,717 residential units in total at its 294-acre freehold Sentul development, which is made up of two distinct halves – Sentul West, lush and green with a private park and upmarket homes, and the trendier Sentul East, with more high-rise residential and commercial offerings.

Though YTL Land is in no rush to add more residences at the development, it is not resting on it laurels. Executive Director Yeoh Pei Teeng tells City & Country in an exclusive interview that the company is focusing on making Sentul a more vibrant place by completing more commercial components, including conserving and repurposing century-old buildings that were once part of an integrated engineering railway workshop complex known as the Central Railway Workshops that was established in the early 1900s.

Committed to conserving and reusing heritage assets, the developer first assesses the integrity of a structure and then conducts studies on its conservation and heritage as well as its capability and scope for adaptive reuse, she explains. “The architectural challenge is to create a relationship between the old and the new.”

One such project is Sentul Works, which the developer aims to complete by the first half of next year. Located in Jalan Strachan, Sentul West, the 110-year-old heritage railway building is being restored and will become a cluster of co-working spaces and permanent spaces for boutique offices – taking up four floors, with a total floor space of 37,000 sq ft – that will be leased out.

“With Sentul Works, we are trying to develop a social space to being young people together and create a vibrant community in Sentul,” says Yeoh. “I think the time is ripe for such a development. If you look at places like Ipoh Kong Heng and REXKL, people are starting to repurpose old buildings.”

She adds that to complement Sentul Works, YTL Lands plans to have a food and beverage cluster of six to eight units in the adjacent Sentul Depot. The F&B cluster is set to be completed about the same time as Sentul Works in 1H2020.

Located next to the lush and private 35-acre Sentul Park, Sentul Works is envisaged as a new-age working environment for young entrepreneurs and start-ups. The colonial building has exposed brickwork, large windows and metal from Sentul’s rich industrial past during the British era.

Formerly the railway headquarters, it once housed the offices of the chief mechanical engineers and his department, the CEO and assistant CEO, the administrative department, personnel department and office manager.

“After checking the integrity of the structure, we worked with teams of engineers, architects, M&E (mechanical and electrical) and marketing to come up with concepts for this project and we realised that due to spatial planning of the site, which used to be an office space, it would be more feasible as an office space and we decided on co-working because that would bring in young entrepreneurs and start-ups,” says Yeoh.

“And though a lot of co-working spaces have popped up, what is unique at Sentul Works is that you get an old heritage building in a park setting,” she adds.

The co-working space will offer a choice of public and private desk spaces while the permanent office spaces will have flexible configurations to suit various corporate needs.

According to Yeoh, the company is in talks with parties that are keen to lease the entire building and run their own co-working space, as well as start-ups.

“The type of tenants has to be aligned with our objective of creating a social and community space and they need to have an appreciation of the heritage of the building. I think we are looking at creative entrepreneurs, businesses and social enterprises, including those in are and design, fitness and wellness, education, recreation and entertainment.

“We envision a vibrant mix of start-ups, boutique offices and shops alongside co-working spaces. This unique setting will offer and exciting and special place for KL urbanites,” she says, adding that Sentul Works is also located in an MSC Malaysia Cybercentre zone which is a boon for MSC companies and start-ups.

The existing 2-storey structure – a shell of bricks and concrete arched colonnades – of Sentul Works will be readapted for four floors as it has high ceilings and large windows. It will also have a rooftop terrace. “They didn’t have air conditioning in those days, so the open and spacious plan provides natural ventilation and light,” says Yeoh.

She adds that the new design includes balconies and bay windows that can be used by those who wish to take a break from work, have a cup of coffee and just enjoy the view. “I think this is a very unique proposition. I have not seen office buildings in KL with this kind of [lush] setting.”

Other adaptive reuse projects in Sentul West include klpac, YTL Communications Centre I and II, Sentul Sales Office and Sentul Depot. There are eight heritage buildings in Sentul West, including a rumah Panjang or longhouse, and a former clubhouse. 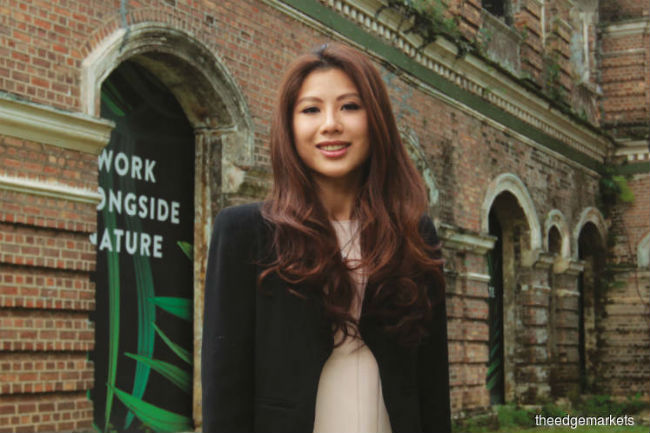